HomeLatest NewsA history of Africa's most (in)famous World Cup kits - Where will...

A history of Africa’s most (in)famous World Cup kits – Where will the 2022 jerseys fit? 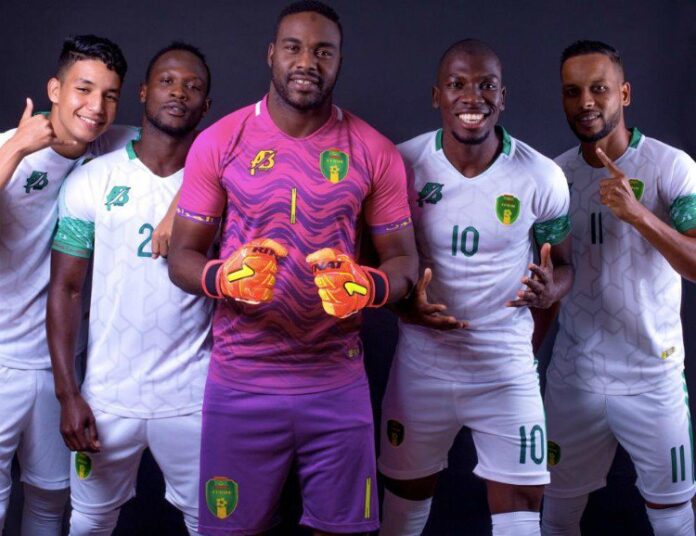 Africa’s World Cup fashion choices have been diverse and dynamic over the years, with some of the best efforts ranking among the most iconic football shirts ever seen, and others best resigned to the bargain bins.

The continent has regularly been at the forefront of World Cup fashion; be it the simple, timeless designs that heralded Africa’s arrival and impact on the grandest stage, to concept designs that have pushed boundaries and created storms of excitement upon their release, the continent’s efforts have consistently generated headlines.

Here ESPN reviews the worst and most ground-breaking designs of Africa’s World Cup participants past, while assessing whether any of the 2022 efforts could one day rank among the pantheon of great African kits. 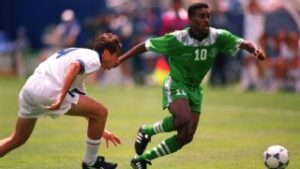 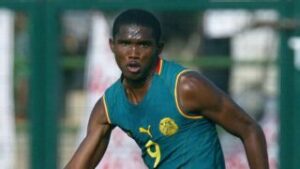 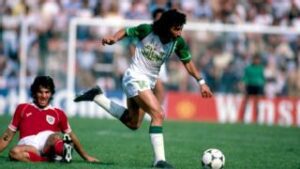 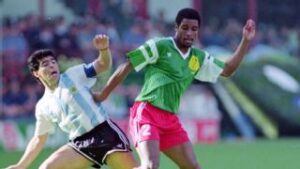 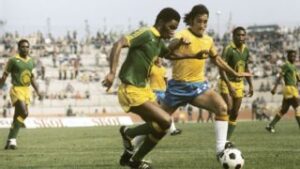 Egypt wore an uncharacteristic green design in Italy in 1934 — before later switching to their familiar red colour — but sub-Saharan Africa had to wait another 40 years before their first qualification.

The pioneers were Zaire [now the DRC], and while their campaign was ultimately disastrous, as a fine generation were thoroughly and tragically outclassed in West Germany, they did provide the world with the first truly iconic African football kit.

At the heart of the design was a roaring leopard’s head — referencing the team’s leopards nickname — and, in case anyone hadn’t got it yet, the word ‘Zaire’.

Adidas took over before the World Cup, adding in the famous stripes to the shoulders and thighs, although even that couldn’t prevent Zaire from being pummelled 7-0 by Yugoslavia en route to a First Round elimination.

Their time at the World Cup was brief, but that Zaire kit still lives on in the global psyche to this day. It’s a much-sought-after retro shirt, and remains a global hipster favourite.

The early 1980s were a transitional time for kits, with some of the globe’s heavyweights sticking closely to their traditional designs, while others opted for more innovative approaches. Algeria — making their tournament debut — fall into the second category.

The likes of Lakhdar Belloumi, Mustapha Dahleb, Rabah Madjer and Salah Assad made the small hop over to Spain and promptly defeated West Germany in their tournament opener — the first African victory over European opponents at this level — wearing outstanding green and white strips in the process.

Headlined by the Arabic name for Algeria — al-Jazā’ir — emblazoned in Arabic calligraphy across the chest of the shirt, the vertical stripes over the left side also contributed to this instant classic.

It wasn’t quite like anything else the tournament had seen before, although Iran did try a similar self-branding exercise at France ’98.

Algeria followed this up with similarly striking shirts at the 1986 World Cup — replete with red away kits — while Adidas were so taken by the imagery of the ’82 shirts, that they co-opted elements of the design into new designs released earlier this year.

The fashion in the 1990s started to hit football in a big way at Italia ’90, with the likes of Colombia, Czechoslovakia, Yugoslavia and the USSR all opting for innovative and colourful designs.

Cameroon didn’t go for something quite as ambitious, with the antiquated shiny Adidas fabric feeling like they still had one foot in the 80s. However, the roaring indomitable lion on the chest added personality and vibrancy to a no-frills design…the perfect attire for Cameroon’s remarkable run to the quarters.

What else could Roger Milla wear when he performed his iconic Makossa corner-flag dance after becoming the World Cup’s oldest goalscorer?

Nigeria lead the way in the 90s

Nigeria’s kits at the 1994 World Cup were a thing of beauty, and arguably represented the high point for African designs at the tournament, before template kits took over.

Adidas opted to incorporate traditional pattern and fabric designs in both their home and away kit, with the former a dazzling green design and the latter a truly emblematic shirt that was worn so unforgettably by Rashidi Yekini and co. in the Super Eagles’ first ever World Cup bout.

This was always going to be a hard act to follow, and Nike went for something different in 1998, dropping the traditional elements but still pulling together an underrated pairing.

The white trim on the shoulders and under the arms added dynamism and power to this Eagles selection, and made for a very effective design — the images of Sunday Oliseh, arms raised, celebrating his thunderbolt against Spain while wearing this shirt is one of the all-time great images of Nigerian football.

Nigeria had proved themselves to be Africa’s kings of kits, although the less said about their 2002 and 2010 attire the better.

Morocco also looked the part — albeit with an early exit — in their red designs at the ’94 tournament, with a large centralised logo and geometric pattern across the shoulders and down the sleeves.

South Africa also ought to be acknowledged for their unique Kappa efforts at the ’98 World Cup, where the Italian manufacturer delivered a design that was a re-imagining of the shirts Bafana Bafana had worn in winning the Africa Cup of Nations two years earlier.

This top wasn’t everyone’s cup of tea, but was certainly one of the most ambitious and unforgettable designs seen at a World Cup.

Love them or loathe them, no one can say that Cameroon’s kit designs in the 2000s weren’t ambitious, with Puma attempting to push through two remarkable strips which are still talked about today.

Ahead of the 2002 World Cup, there was their infamous vest kit, which was worn during the victorious Nations Cup campaign, showing off the Lions in all of their dynamic, indomitable glory.

The intention was for the bicep-exposing top — the home design in Cameroon’s traditional dark green, away in white — to be worn at the World Cup in South Korea and Japan, only for FIFA to intervene and insist that the lack of sleeves meant the kit was against tournament regulations.

Puma eventually relented, adding black material on the arms to ensure that the tournament logo could have its pride of place, although certainly the sartorial tweaking reduced the effectiveness of these revolutionary designs.

Cameroon also tried to take football fashion in a new direction two years later, when they debuted a previously unseen all-in-one kit, although this effort was relatively short-lived.

Sepp Blatter decried that Cameroon had come up with yet another “outfit that went against the rules of the game,” and FIFA were presumably delighted when the Lions didn’t qualify for the 2006 World Cup.

Nigeria’s kit in 2018 was a record-breaking football kit even before it hit the shelves. Announced by Nike in February, four months before the World Cup, the dazzling home jersey had already reached 3 million pre-sales before it was even released, and when it was put on sale, sold out online within three minutes.

It was the greatest pre-sale success story of any Nike football design which, for an African football nation to eclipse Europe’s major clubs, is testament to the genuinely striking look of the shirt.

Released along with a Naija-inspired streetwear range, the kit was both a nod to the retro ’94 designs and an effective way of dragging the Eagles into the future. The zig-zags, reminiscent of Yekini and co. 24 years before, were a subtle reference to eagles’ wings, while truly capturing the public’s imagination and genuinely generating a buzz for this instant collectable.

The line between football and art had never felt so thin, and Nike — having taken up the challenge of dressing the ‘world’s most expressive team’ — certainly didn’t let us down.

The new kits on the block

German manufacturer Puma remains king as far as African kits are concerned, and will be dressing three of the five African qualifiers at the ’22 tournament.

Senegal’s home kit features a strong chevron design across the chest, with the return of the red to the trim, an allusion towards the iconic generation of 2002 that reached the quarter-final at the first time of asking, and the nation’s best ever kit.

Unfortunately, Puma have lumbered Senegal and Ghana with their questionable ‘box’ template for the away kit, which looks simultaneously too cluttered and too plain. It can’t shake the perception that it would really be a better training shirt than an actual in-game top.

The Black Stars’ home kit, however, could stake a claim to be among the standout home jerseys of the tournament; it’s clean, it’s simple, but there’s an eye on the detail as well, be it the pan-African colours to cut off the sleeves, or the bold black star on the chest plate.

Morocco, who have oscillated between red and green home kits over the years, have stuck with the red this time around, with Puma (mercifully) eschewing the box design that they’ve used for Ghana and Senegal in the away design to produce two really classy efforts.

The horizontal band across the chest on the home shirt is a throw-back to the magnificent France 98 kit — worn in such style by Mustapha Hadji — and while the colours are inverted this time around, this top is still dripping with nostalgia. Instead of the box on the away kit, the shirt boasts a circular geometric pattern that encircles the players’ numbers.

Tunisia, who have turned to Kappa for the 2022 World Cup, haven’t been too ambitious with their kit designs in the past, barring a brief flirtation with eagles’ wings on their France ’98 strip.

This time, they have plumped for a subtle print in the kit that emulates ancient Carthaginian armour, with the visual effect more prevalent on the white away shirt and the dark olive green third-choice. It’s a decent effort, but won’t be remembered among Africa’s all-time great World Cup kits.

At least its conception hasn’t generated legal problems, which can’t be said for Cameroon, after they ditched Le Coq Sportif to sign with little-known One Sports, who are making their first foray into the world of football kit manufacturing.

It was a questionable decision by Samuel Eto’o, with the logic hard to readily discern, although plumping for an unknown designer doesn’t necessarily correlate to a less popular design, as some of the more adventurous African nations proved at the Nations Cup earlier this year.

Will Cameroon’s belatedly released kits with chest-plate motif fall into this category, or will Eto’o and the Lions regret cutting Le Coq Sportif loose?