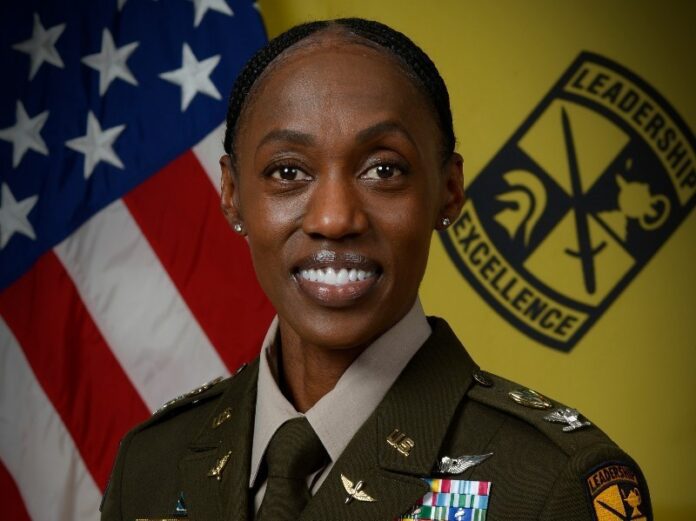 The United States Army has promoted Amanda Azubuike, a British-Nigerian, to the rank of Brigadier-General.

The promotion ceremony held at a military base in Fort Knox, Kentucky, United States of America.

Speaking after being decorated, Azubuike, who is also a US citizen, detailed her journey from a high school student to becoming a brigadier-general.

Her words: “I recognise the gravity of this moment. I recognise the responsibility, the expectations, as well as the scrutiny that comes with this promotion, I also recognise the power of representation and the importance of diversity. I’m privileged to have benefitted from trailblazers and I’m committed to doing my part to leave a better path for those coming behind me.

“I’m honoured to be selected to serve at this level and feel fortunate to serve in my current position. I believe I can contribute here in a meaningful way.

“I joined the US military before I was even a US citizen. But I always knew this country was great, that it was worth fighting for. And that it is truly the land of opportunity. I’m very proud of my heritage, and my ethnic roots but I’m equally as proud to be an American.”

Commanding General, US Army futures command, James Rainey said the position of brigadier-general is for exceptional officers, commending Amanda for her inspirational attitude, noting that she has been dutiful and he is motivated her by her strides.

His words:“This is a really big deal. There are about 1.2 million men and women in uniform any given day and there are about 300 active-duty general officers. So, we say it’s a one percent promotion, Amanda inspires me. Ever since I met her and started working for her, she is inspirational and I get energy from her.

Amanda is the daughter of a Nigerian father and a Zimbabwean mother. Her parents relationship dates back to their university days in London.

According to Azubuike, her mother moved to the United States shortly after her parents’ divorce “in search of better opportunities.”

She was introduced to the US military army during her senior year of high school. She joined the army national guard before becoming a citizen in 1989.

Currently, she is a deputy commanding officer at the US Army Cadet Command. Before then, she worked as chief of staff or senior military advisor at the Office of the Secretary of Defense.