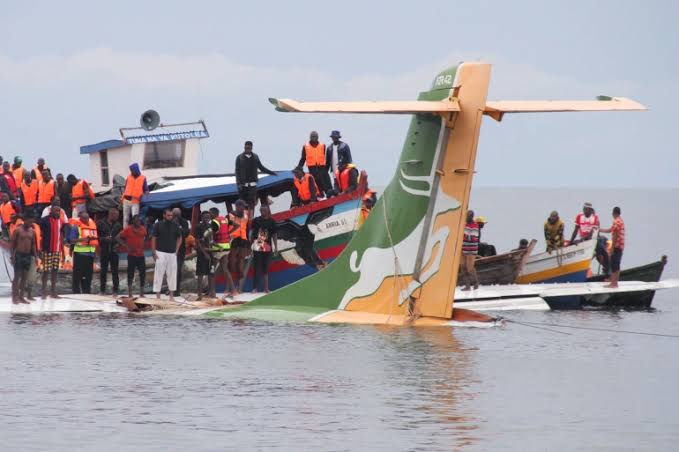 No fewer than 19 people are dead, as a Tanzanian passenger plane crashed into Lake Victoria in an attempt to land in the lakeside town of Bukoba.

The tragedy, which occurred around 08:50 local time, has been blamed on bad weather.

There were 43 people on board and only 24 survivors have been accounted for.

The two pilots, who initially survived and managed to speak to local officials from the cockpit, are yet to be seen.

Rescuers, including fishermen, were able to wade through the water to bring some of those still inside the plane to safety.

Emergency workers have used ropes to pull the ATR-42 aircraft even closer to the shore at the end of the Bukoba airport runway, and some of the plane’s body is now above the water.

One of the crash survivors, Richard Komba, told reporters that when the plane was about to land, the weather had deteriorated, forcing the pilot to reroute the aircraft.

“We were then informed that we would be landing shortly, but there was heavy turbulence. We later found ourselves in the lake,” Mr Komba said.

“Water then entered the plane and those sitting near the front were covered by it. I was in the back seat and most of us in the back of the plane struggled to get out.”

He said one cabin crew member was struggling to open the aircraft’s door, but he was eventually able to be freed.

“When we got out, no boat was there – it took quite long to get rescued but the boat that came was not so good, it was a canoe.”

Tanzania’s Prime Minister, Kassim Majaliwa, said the rescued passengers are receiving treatment in a hospital and were not seriously injured, “but they are shocked and worried”.

After visiting the scene of the incident, Majaliwa promised that an extensive investigation would be carried out to determine the full causes of the crash.

“We are still identifying the bodies, but it is highly likely that the pilots might have perished,” he said.

The airport has been closed until further notice.

President Samia Suluhu Hassan has given her condolences to those affected and called for calm as rescue operation continues.

The plane, operated by Precision Air – Tanzania’s largest private airline, was flying from Das es Salaam to Bukoba via Mwanza.