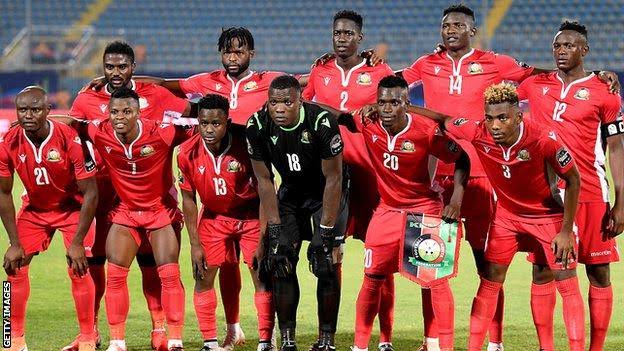 Kenya’s Harambee Stars at the Africa Cup of Nations in Egypt.

Kenyan government and football federation want the country’s global suspension lifted by world football governing body, FIFA, as they believe they have met the requirements.

FIFA slammed the ban in February after Kenya’s sports ministry disbanded the football federation over alleged misappropriation of funds and appointed a 27-man caretaker committee in November 2021.

But now, the federation’s Vice President Doris Petra and General Secretary Barry Otieno have been reinstated to their positions and control of offices handed back to the board, which were conditions demanded by FIFA for the ban to be lifted.

Consequently, the Football Federation has written to FIFA to request the reversal of the suspension.

A statement from the federation reads “the government has fulfilled the aforementioned conditions, as set out by the Fifa council, as part of the ongoing efforts to allow Kenya’s return to international football.”

Cabinet secretary for Youth Affairs, Sports and the Arts, Ababu Namwamba, who had been involved in discussions to resolve the issues say “we were engaged in consultations with a view to finding a resolution to the gridlock that has held Kenyan football hostage for the last year,” Namwamba said.

“Football is too important to be placed at risk. The government expects 100% integrity in the management of football.”