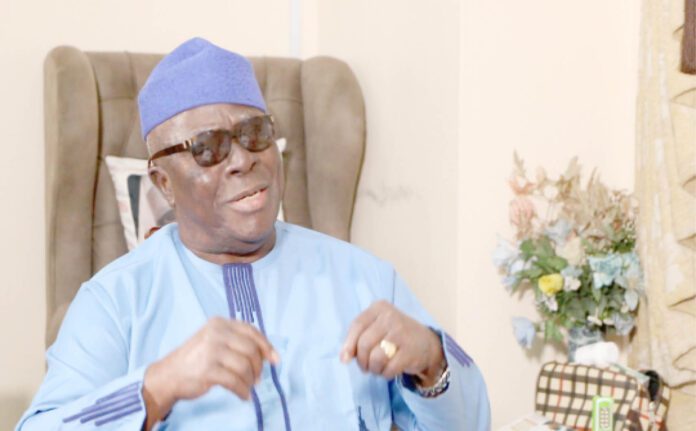 Leader of the Pan-Yoruba socio-political group, Afenifere, Chief Ayo Adebanjo, has urged the supporters of the Presidential candidate of the Labour Party, LP, Peter Obi and his running mate, Datti Baba-Ahmed to be steadfast in actualising the Obi-Datti cause.

Adebanjo, who spoke in Lagos at the public presentation of a book: “The Challenges of Good Governance and Leadership in Nigeria; The Peter Obi Factor,” said the task of electing Obi-Datti into power is not a tea party as the oppressors do not want to vacate office.

He said: “Peter Obi is a young man of tomorrow who will rule Nigeria for the good of the people and I am here today to support him in order to make his ambition to become president a reality. To make Peter Obi the president in the circumstance of Nigeria today, is not a tea party. It is not an easy job. Those who are there do not want to leave but we will push them out.

“I am not impressed by your clapping and dancing; I want your action. When I say this is not a tea party it means we are fighting a battle where the oppressors want to remain. Ladies and gentlemen, fasten your belts. On the day of election, as eligible voters make sure you go to the polls. You don’t have money but power. So, on that day, show them that their money is useless.

“I am an embittered old man but I have found in Peter Obi a young man to cool me down for a better tomorrow. I want to appeal to young ones to take this job from now to February as a full-time job. Don’t let them say Obi has no structure, demonstrate to them that you are the human structure and push them out. They will try to put a crack. Today, they said the Labour Party chairman had resigned. Who told them that? They say Afenifere is divided, who told them that?”

The Yoruba leader further cautioned Obi-Datti supporters to shun vote-selling, saying: “You can only make their money useless by your positive actions. Be conscious. See how you will stop vote-selling. The oppressed are those who bought a bag of rice for N8,000 in 2015 and now buying for N40,000; the oppressed are those whose children are out of school. You are not voting for Obi to be the president but to change your lives and that of your children. Take my message seriously. Let them know you want to change the system. Be incorruptible on that day, make yourselves polling agents, man every polling booth ‘obi-diently.’ Your future is in your hands, be obedient and compliant and your future is guaranteed.”

Speaking at the book launch, Peter Obi, who was represented by architect Clara Eromosele, Secretary, Peter Obi Good Governance Advocates, noted that one major reason for the challenge of good governance in Nigeria is because Nigerians have refused to take responsibility to transform the nation.

“The first thing I would say about the challenges of good governance in Nigeria is that Nigerians haven’t taken responsibility to transform Nigeria. We must vote for Peter Obi and get involved in the process to make him the president because now is the time to get our country back,” he said.

Speaking on the book, President of Alaigbo Development Foundation, ADF, Professor Uzodinma Nwala, said: “We didn’t just start to write a book on Peter Obi, it emerged naturally as if it were ordained by God. I was so moved when Chief Olusegun Obasanjo called Obi and asked that he sits on his seat. What Obasanjo did, and that is what we are doing, is to pass on the baton to Peter Obi, who represents the younger generation.”

The book Reviewer, Mr. Dele Farotinmi said, among others, that the book centres on the biography of Obi, his philosophy of leadership and good governance.

He said as governor of Anambra State, Obi discharged his duties eloquently, served as leader not a ruler and interpreted his role as the servant of the people.