With dozens of records already broken by him, he bestrides the entire football world like no other. Having played for some of the best clubs in Portugal, England, Spain and Italy, he is a striking character whose dint of hard work has earned him a revered position in the pantheon of greats.

Outside football, he is a household name. A testament to this truth is his recent accomplishment on Instagram, a social media platform in which he became the first man on earth to attain 500 million followers. While he personifies the phrase “talent without working hard is nothing,” an axiom that is said to have emanated from him, it is unbelievable that Cristiano Ronaldo dos Santos Aveiro is currently without a football club.

His current predicament is coming after holding an interview session with Piers Morgan on Talk TV. The interview, which aired in two-part on 16 and 17 November respectively resulted in a contract termination by his former employer, Manchester United, a football club in England, whom he joined from an Italian side by the name of Juventus over a year ago.

Ever since his contract with his previous employer was terminated, rumours have been making the rounds that Lobi Stars, a football club in the Nigeria Professional Football League, NPFL, are in the contest for his signature.

However, the Makurdi-based club have come out to deny the report on their Twitter handle. Their words: “Please be informed that #WeAreLobi is yet to make any contact with representatives of #CristianoRonaldo following his release from @ManUtd. We wish him the best and #LobiStars will make no further comment on this.” 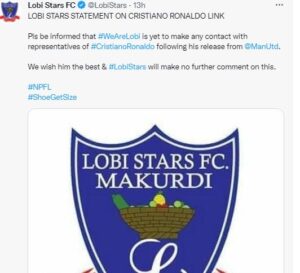