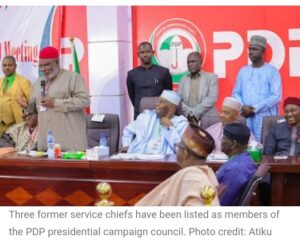 – The Peoples Democratic Party (PDP) has reportedly appointed three former service chiefs as members of the campaign council for its presidential candidate in the 2023 election, Atiku Abubakar. Premium Times reported that the membership of the council was announced on Thursday, September 15, by the PDP National Organising Secretary, Bature Umar, in Abuja.

The appointed ex-army chiefs are:

1. Ishaya Bamaiyi Bamaiyi was army chief from 1996 to 1999 under the administrations of late Head of State, Sani Abacha and Abdulsalami Abubakar.

Quicktvafrica gathers that the three retired lieutenant generals and former chiefs of army staff were named as members of the party’s Presidential Campaign Council.

Omo street : Portable drop another hot song title Azaman, Which concern the dispute between cartefe and bari tega on Machala song, but it seem Azaman beats is Asake beats.

Magazilla is the most advanced highly customizable drag and drop magazine WordPress theme. Speed, security, SEO, social integration and much more – all in one theme. Start writing, publishing, advertising and sharing in minutes.

We use cookies on our website to give you the most relevant experience by remembering your preferences and repeat visits. By clicking “Accept”, you consent to the use of ALL the cookies.
Do not sell my personal information.
Cookie SettingsAccept
Manage consent

This website uses cookies to improve your experience while you navigate through the website. Out of these, the cookies that are categorized as necessary are stored on your browser as they are essential for the working of basic functionalities of the website. We also use third-party cookies that help us analyze and understand how you use this website. These cookies will be stored in your browser only with your consent. You also have the option to opt-out of these cookies. But opting out of some of these cookies may affect your browsing experience.
Necessary Always Enabled
Necessary cookies are absolutely essential for the website to function properly. These cookies ensure basic functionalities and security features of the website, anonymously.
Functional
Functional cookies help to perform certain functionalities like sharing the content of the website on social media platforms, collect feedbacks, and other third-party features.
Performance
Performance cookies are used to understand and analyze the key performance indexes of the website which helps in delivering a better user experience for the visitors.
Analytics
Analytical cookies are used to understand how visitors interact with the website. These cookies help provide information on metrics the number of visitors, bounce rate, traffic source, etc.
Advertisement
Advertisement cookies are used to provide visitors with relevant ads and marketing campaigns. These cookies track visitors across websites and collect information to provide customized ads.
Others
Other uncategorized cookies are those that are being analyzed and have not been classified into a category as yet.
SAVE & ACCEPT